There is a great deal of controversy concerning the actual departure point of the Mayflower and the Pilgrim Fathers from England for America. Several cities claim ownership, not least, Southampton. In actual fact there were several departure points as well as stops along the way. 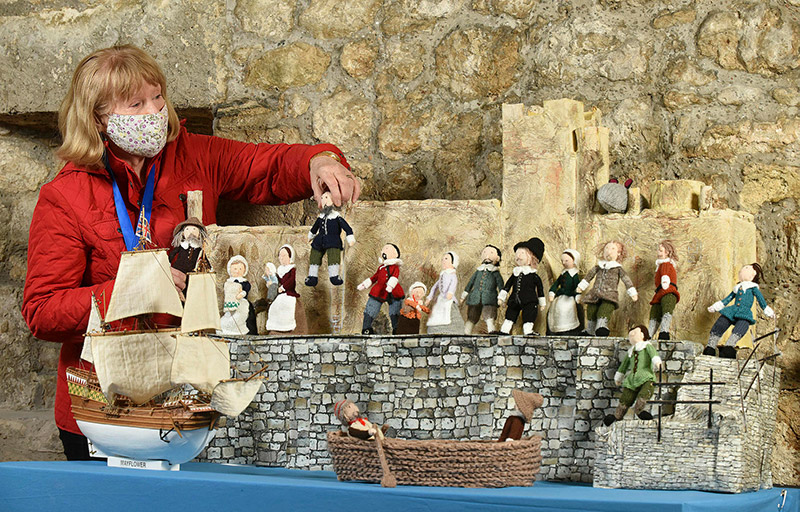 Southampton was the place the disparate groups of pilgrims first joined together, some coming from Rotherhithe, the ship’s home port, in London. Sixty five in all joined the ship there in mid July 1620. The Mayflower then departed for Southampton.

The Mayflower dropped anchor in Southampton water on 27th July. For seven days she waited for her sister ship, The Speedwell, which was on its way from Delfshaven, Holland with fifty Leyden church members. Although the Speedwell had been refitted before she left in Holland on 1st August, she had to have another refit at West Quay, probably not far from the spot occupied by WestQuay shopping centre today. The Pilgrim Fathers could ill afford the extra expense and had to sell some of their belongings, food and stores. The memorial on Town Quay Southampton was unveiled in 1913 and is inscribed with the two dates and a plaque telling the pilgrims’ story.

For nearly two weeks both groups of pilgrims stayed in Southampton and at least one Sotonian joined them. It is well documented that John Alden, a Southampton cooper sailed with the pilgrims when they eventually left on 15 August 1620, there may well have been other families. The memorial, with a replica of the ship on top, marks their departure point. Unfortunately the Speedwell, despite two refits, was still leaky. The pilgrims had to put in at Dartmouth for further repairs. Then, when they were two hundred miles beyond Land’s End they had to turn back for Plymouth because Speedwell sprang another leak. It was early September and they were less than one hundred and fifty six nautical miles from Southampton. The Speedwell was deemed too unreliable to attempt an Atlantic crossing. All the pilgrims crammed on to the Mayflower and, once again, set sail.

The Mayflower was not a large ship, just 100 feet long weighing 180 tons. She had previously sailed cross channel with cargoes of wool and wine, hats, hemp, Spanish salt, hops and vinegar. She also made the occasional foray into the North Atlantic and the Mediterranean.

The abandoned Speedwell with all her leaks, was sold soon after the Mayflower left for America. After yet another refit she continued to make many profitable voyages. There has been a certain amount of speculation and rumour around this fact. Some say Master Reynolds, the captain of the Speedwell, was afraid of the Atlantic crossing or of starving to death in America and purposely made the leaks himself.

There is a story that Plymouth was not the last English port Mayflower put into. Allegedly, barrels of water picked up in Plymouth were found to be contaminated and she stopped off at Newlyn in Cornwall for more. Whether this is true or not it’s hard to tell but Newlyn has a plaque nonetheless!

So what became of the Mayflower once the settlers left? In April 1621 she sailed for England once again, her crew, decimated by disease. The westerly winds that had caused so much trouble on the outbound voyage helped her on her way and she arrived in Rotherhithe in May. Within the year Captain Jones was dead, the New World journey had taken a toll on his fifty two year old body. The ship was berthed in Rotherhithe for two years not far from his grave in St Mary the Virgin churchyard. By 1624 she was unseaworthy, the final casualty of that fateful journey. No one knows what became of her battered hulk.

In Southampton we are proud of our part in the pilgrims’ story and our Mayflower connection. We have a Mayflower Park on the shoreline close to the spot where the Mayflower departed. Our impressive theatre, close to the main railway station is called The Mayflower. Through Dock Gate 10 there is a Mayflower Cruise Terminal. One of the university halls of residence is called Mayflower Halls and, of course, we have the wonderful Mayflower memorial.

<- Back to A-Z Introduction